Just as a neurologist looks to a patient’s neural network for guidance in addressing neurodegenerative diseases like Parkinson’s, Alzheimer’s and Huntington’s, researchers in the artificial intelligence arena study neural networks (composed of artificial neurons) to improve predictability in complex physical, biological and engineering systems.

In a new paper for Physical Review Research titled “Long-term prediction of chaotic systems with machine learning,” Lai and his team use artificial recurrent neural networks to increase the ability to predict the state changes and evolution in chaotic systems that exhibit a sensitive dependence on initial conditions.

Chaos is often exemplified as the mechanism behind the “Butterfly Effect,” wherein a butterfly flapping its wings may cause a seemingly unpredictable, catastrophic weather event half a world away.

“In a chaotic system, you cannot make a long-term prediction,” explained Lai, “because a small amount of error is going to be magnified exponentially.”

“It’s an incremental process,” Lai said. “We train the neural machine with measured time series from the chaotic system of interest, such as an electrical power system, a nonlinear optical system or an epidemiological system such as the spread of COVID-19, and the machine begins to gain the ability to predict the future of the system."

A neural network machine so trained is able to predict the state evolution of a chaotic system five or six times longer than that which can be achieved using the traditional prediction methods in nonlinear dynamics.

Yet, because of the nature of chaos, prediction will begin to deteriorate over time. Additional data is then added to lengthen the prediction time horizon.

“We add one or two data points once every few cycles of natural oscillation of the system to gradually update the knowledge base of the machine so that it can keep generating accurate predictions for an arbitrary, long period of time,” Lai said. 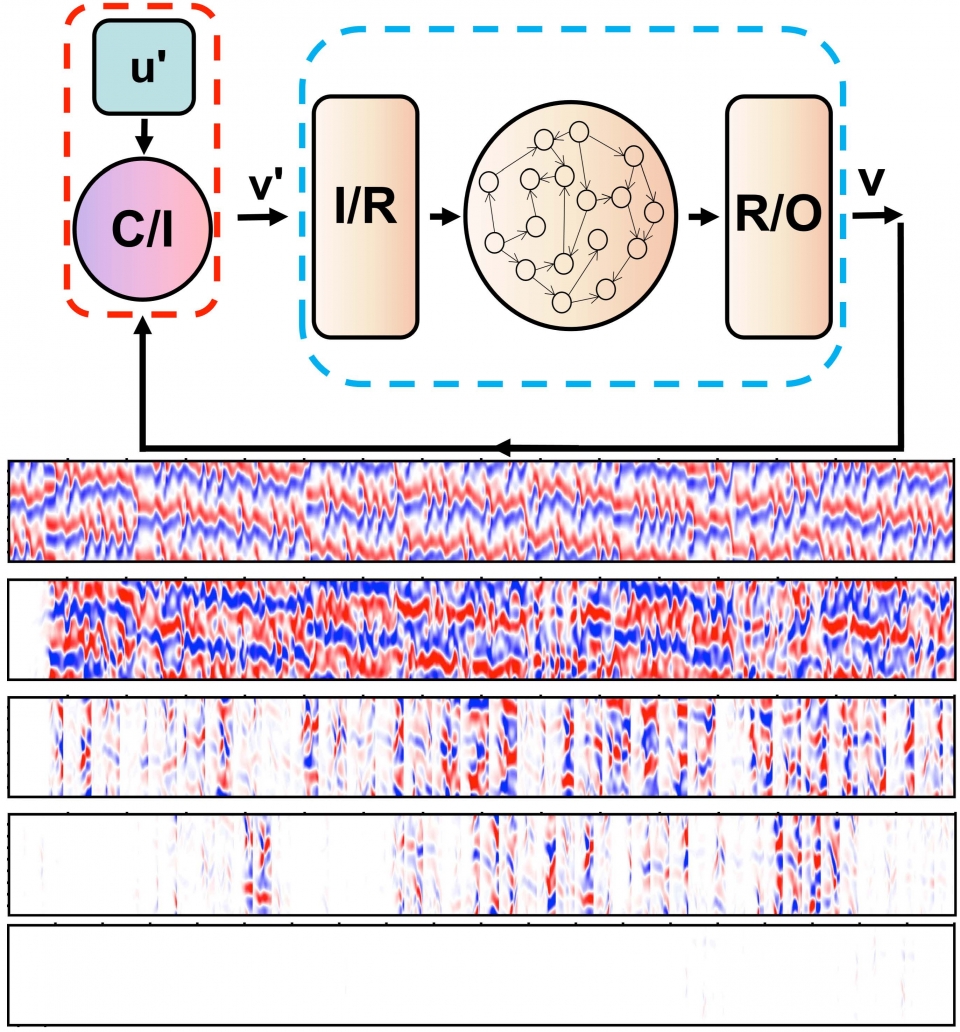 Top: Articulate neural network structure for long-term prediction of chaotic systems. Panel 2: Spatiotemporal state evolution of a chaotic system, where the ordinate is space and the abscissa indicates time. Panel 3: Prediction errors without state update (the white region indicates near zero error). Panels four through six: As rare state updates are provided to the machine at an increasing rate, the prediction errors are reduced and eventually diminish in space and time.

Lai’s group is currently working on exploiting machine learning to predict catastrophic events in complex systems. For example, if you train a machine with data from an ecosystem in a normal functioning regime before any collapse, the machine has the power to predict, upon some changes in the environment, if and when the system is going to collapse.

Likewise, the machine will ultimately be able to predict interruptions to a power grid.

“We can train the machine to virtually mimic previous failures,” Lai said. “We can measure voltage usage at certain points and, based on historical grid failures, identify if and when the grid may be vulnerable to failure.”

With regard to COVID-19, Lai notes that one challenge is that the currently available datasets are still too small to train a machine. However, people have used data from the SARS epidemic in 2003–04 for training to predict the current COVID-19 trend.

“At the moment, it seems that machine learning may be of secondary importance because a detailed and comprehensive mathematical model for COVID-19 can be built, which has generated accurate predictions of the epidemic trends in China, South Korea, Italy and Iran.”

Other researchers who contributed to this work are Huwei Fan, Junjie Jiang, Chun Zhang and Xingang Wang.  In addition to their affiliations with ASU, Fan and Zhang are also affiliated with the School of Physics and Information Technology at Shaanxi Normal University, Xi’an, China.