Naughton, who is a postdoctoral researcher for the Department of Physics’ Center for Biological Physics, has been humorously comparing cat behavior to her research findings for years.

“As a student, I always appreciated when lecturers had a fun aside or explanation to break up their talk, so I wanted to do the same with my work; being a huge cat lover, that seemed the natural choice,” she said.

Naughton initially started by hiding one or two cat images amid her presentation slides. As the idea gained momentum, she learned to draw her own cat images and began including them in her work more directly. She now hosts a twitter account called @ExplainedByCats, where she shares snippets and sketches illustrating the principles of her research through her drawings.

Last month, she took her skills a step further. At the 64th annual meeting of the Biophysical Society, Naughton won first place in the conference's Art of Science Image Contest with her illustration, “If Proteins Were Cats.”

The international conference, hosted this year in San Diego, featured symposiums, workshops, lectures, panel discussions, exhibits and networking events. The conference brought together more than 7,000 researchers from over 45 countries.

The Art of Science Image Contest is a feature every year, with approximately 10 finalists chosen to display their work in an open exhibit. Winners are determined by the vote of the conference attendees.

“Often, the entries are more directly obtained in the course of research, and I was a bit worried people might find a cat sketch too silly or irrelevant — so I was happy to know that people had liked it and really excited to win first place!” Naughton said. “It was great to see the effort I'd put into it pay off.” 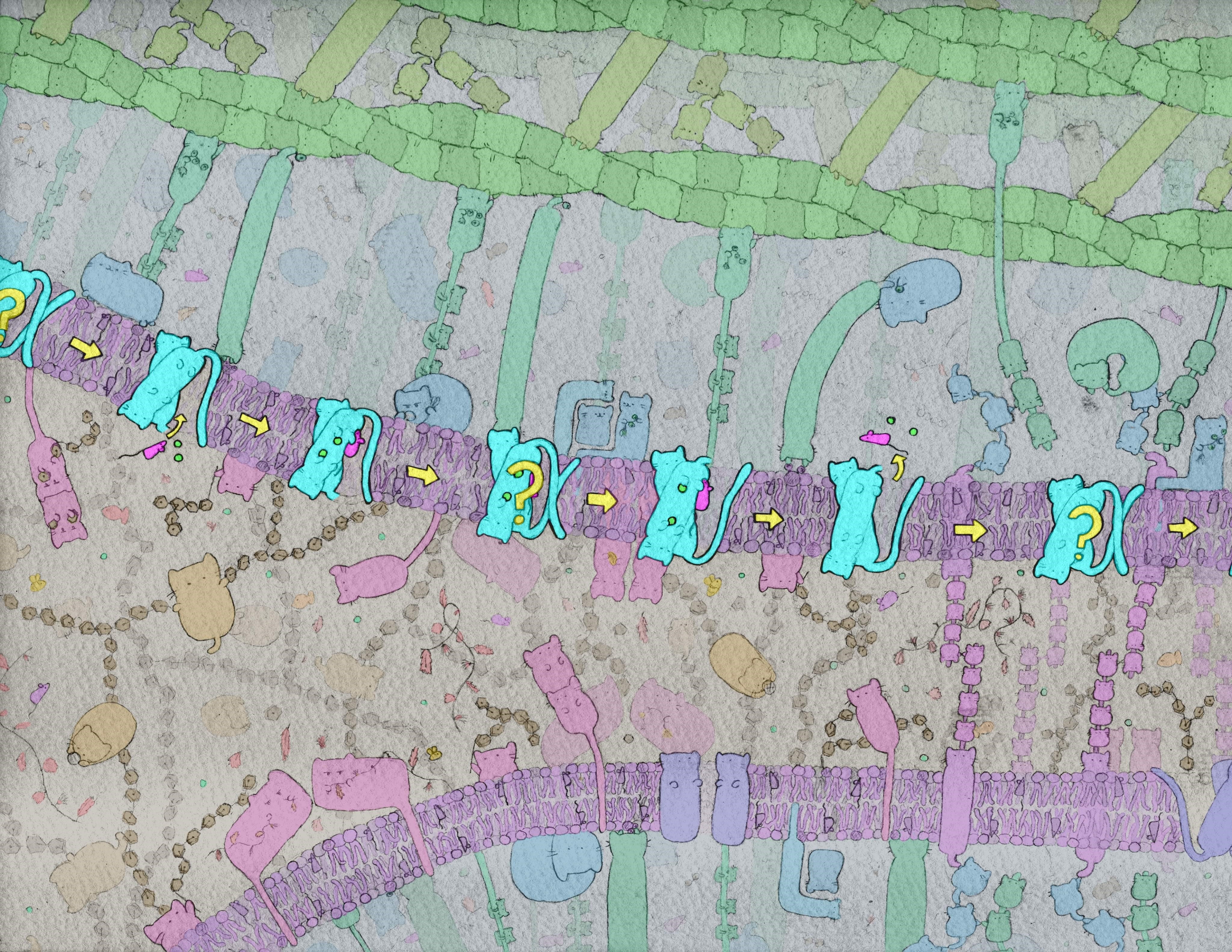 Naughton's whimsical drawing of cats as proteins was a conference favorite.

In addition to her art submission, Naughton also presented some of her current research at the conference through both a talk and a poster — and just a few cats for good measure.

She studies bile acid transporters, which are proteins in the lining of the intestine that transport and recycle bile acids — molecules synthesized from cholesterol in the liver for use in digestion and absorption in the intestines. Creating simulations to increase our understanding of these proteins – and the processes they facilitate — could lead to new methods for drug delivery. Further exploration could also unlock new treatment methods for high cholesterol through manipulating the rate at which existing cholesterol is changed to bile acid.

Her success at this year’s Biophysical Society conference carries with it a note of serendipity since the conference played a significant role in her journey to ASU. It was at a previous conference that she was introduced to the work of Oliver Beckstein, associate professor in the Department of Physics’ Center for Biological Physics. After completing her graduate studies at the University of Oxford in England, and looking to gain more international experience, Naughton reached out to Beckstein about possible research opportunities.

“When she asked if I had a position available I was thrilled to have her apply,” Beckstein said. “She had experience in advanced simulation methods … she had done excellent work with Mark Sansom at Oxford, who was my (PhD advisor) at Oxford.”

“The potential projects we discussed sounded great, and the campus looked like a good place to work — so here I am!” Naughton said.

ASU’s Center for Biological Physics seeks to understand biological phenomena such as cellular dynamics and biomolecules by applying the tools and methods of physics research. The interdisciplinary collaboration brings together researchers and faculty from physics, chemistry and engineering to study biological phenomena from a physics perspective.

Having begun her undergraduate studies unable to decide between physics, chemistry and biology, a collaboration such as the Center for Biological Physics had to offer was an ideal fit for Naughton. And, evidently, proteins are an ideal subject for a cat lover.